Our Convert to Vector (Vector Redraw) Service works as follows

Our Customers
Our logo redraw vectorisation service has been used around the world with customers located in the UK, USA, Europe and Australia (to name a few areas). Our customers include
and many more...
Customer Reviews

"Thank you for this excellent service to convert 2 logos to vector format. The process went exactly as advertised, service was slick, quality of the artwork is brilliant and delivered as promised. In our view this was great value for what it cost us."

or Get a Quote (within 30 mins)
Below, you will find some mini case studies on vector conversion work we have done for our customers.
If you have any questions, please contact us. 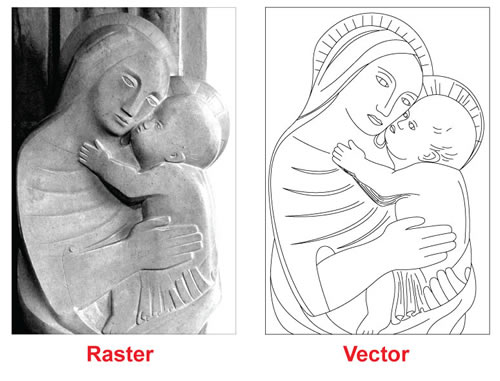 This image to vector conversion was requested by an artist who hand sculptors stone. The traditional way is to take a big rock and start from fresh - without any template. He wanted this image redrawn to a line drawing which he was going to use as a template by printing it on a poster, sticking it on a rock and cutting out the outline. Once the outline was cut out he would then chisel the design. This reportedly saved him a long time and allowed him to compete in this competitive area. 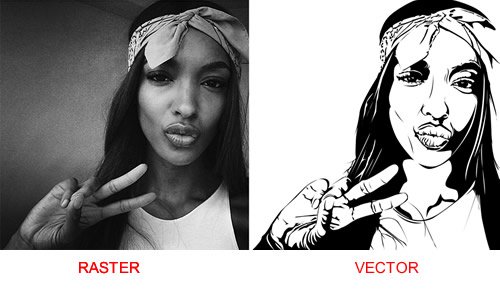 The friend of a supermodel came to us requesting the image to be redrawn as a slightly abstract piece which would then be printed on to t-shirts as a gift for her. We emailed him some different styles which resulted in him choosing a single tone image. The vector is the result of the work we did to redraw the image. 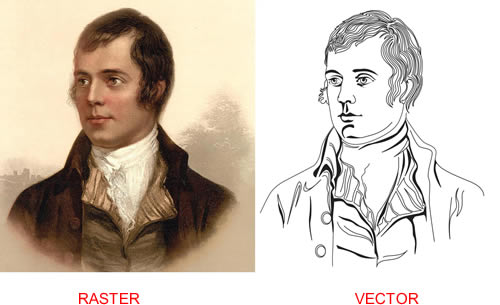 We received this artwork from an engraving company to convert in to a one colour line vector which they could then use to engrave in to wooden ornaments. As with all vectors made for engraving, the needle follows the black lines to carve out the required shape.

We received this sketch from a very talented illustrator that was setting up a new jewellery business. Their brief was to convert their logo to a vector so that they can use it for print, t-shirts and other items to market their brand. Our vector redrawers, redrew this by hand making sure that it was extremely accurate, compared to the raster the customer supplied. 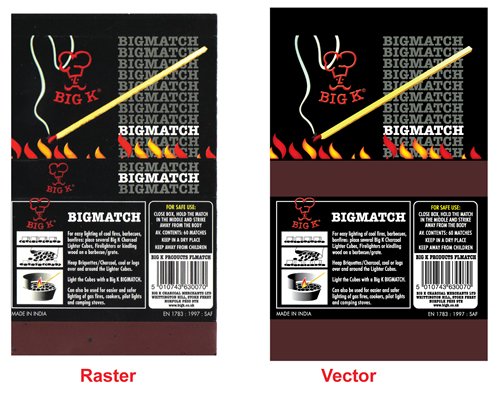 This company produces extra long matches and charcoal for the UK market. They litho print the packaging in India but the plates had to be replaced. They didn't have the original file and wanted an exact redraw with a small change - including making the colours match as close as possible. The packaging (with a few matches - thank you!) was posted to us to make sure we didn't miss anything. The vector conversion was done in 2 stages - the first stage was a standard redraw using the scan. The second stage was to modify the colours to match the ones in the original packaging as close as possible. The final vector was then supplied to the company - who asked their printer to run a few copies to produce a 100% colour match (as a 100% colour match can only be done at the printing press). 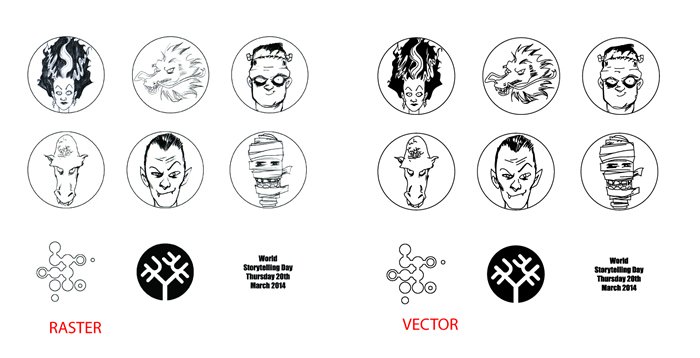 This company wanted to create some stickers for halloween but couldn't find the vector versions. They used our vector conversion services to redraw this bitmap to a vector.

The customer had some very old and weathered stationery that they wanted reprinting. However, they didn't have the vector. We were asked to redraw this image as close as possible. This was a very complicated redraw due to the number of objects in the original raster but we managed to deliver this piece to a very satisfied customer! (Click on the picture to see a larger version of it)

The customer had drawn a coloured sketch that they wanted an outline to be created, with some changes (removing the tree, extending out the shop sign, adding another item in the shop window etc). As they now have the vector, changes can be made very easily - for example, changing the window display. 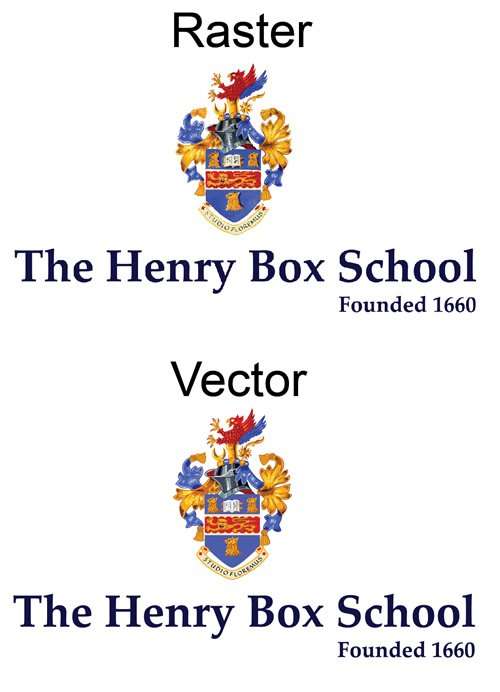 We were requested by the school to convert their logo in to a vector so that they could use it for any future print work. This was an intricate conversion that required use of tools that got the gradients/lighting seen in the original raster correct.

This school wanted their logo etched on to their main doors. We were commissioned to convert the raster of their school logo into a vector line drawing that the etching company could use to etch the logo. The etching needle would follow the outlines to create a perfect etch of their logo. This work was carried out by the designers that specialise in creating outlines for etching and engraving.

This customer produced a sketch that needed to be neatly redrawn as a Vector. They also indicated that certain countries had to be emphasised in the same style of the sketch. The MLC lettering had to be redrawn exactly - with the other lettering using a similar font. 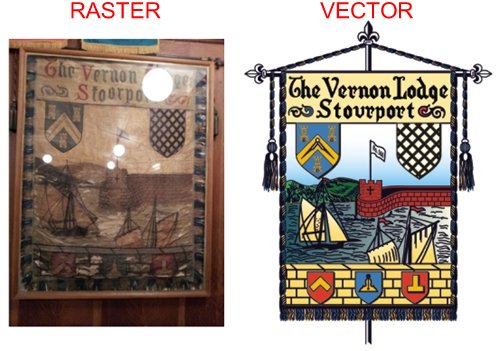 This company had a crest that was over 100 years old. They wanted it printed on to a fresh banner so that they can put the current (weathered) crest in to storage to keep it from fading further. They supplied us with this photograph and close up shots of specific elements of the crest. They also wanted some numbers added on to the flag that you see above the castle turret, but retaining the same curvature of the flag so that it didn't look out of place. On the right, you will see the result of the vector conversion. 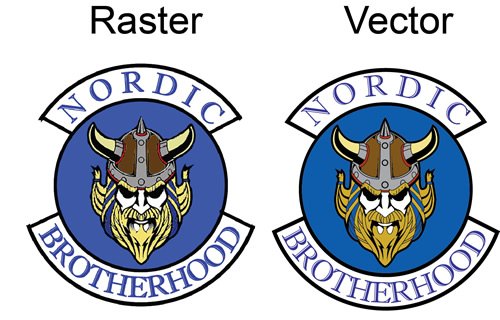 This customer wanted their club logo sublimated on to a tshirt with the beard changed to a colour that was subtly different to the Viking horns. The vector conversion shows the final result. 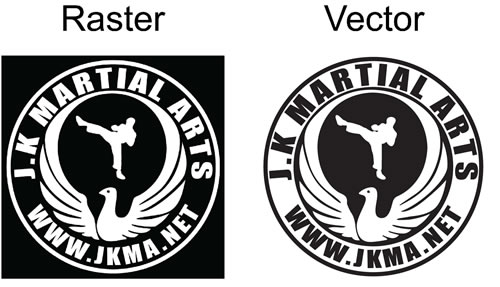 This company teaches martial arts and wanted their logo printed on to their white uniforms. We inverted the colours while redrawing the image as a vector to guarantee that it prints correctly on to a white uniform.

This customer wanted their logo converted to a vector, retaining the detail you see in the original raster. 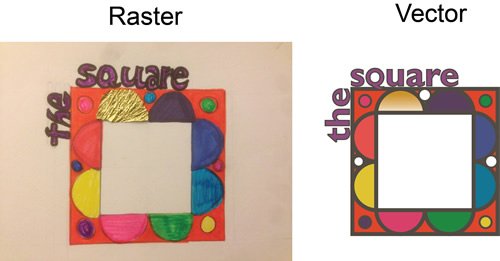 This customer created a sketch of their logo, cut it out and then stuck on the gold leaf. They wanted a redraw, with the text using the closest font to their hand drawn version. The gold leaf, they wanted in a specific golden brown colour with a gradient fill.

This company wanted to create some trophies with their logo etched in to them. We redraw an outlined version of their vector. The black outlines you see are what the needle follows to perform the etch.

This company wanted their logo silver foiled on to their product. Their printer requested that they send them a vector to carry out the foiling. We consulted with the client to make sure that both parties understood exactly what had to be foiled and then redrew the vector accordingly. All the black colour you see in the vector conversion had to be foiled.

This gas fitting company came to us requiring a logo to be printed on to a black tshirt. Their printer was going to print it using just the white colour. For legibility, we advised removing the canister that you see in the raster image. The final vector was supplied in white, against a transparent background.
We are based in London (UK) and produce high quality vector graphics for printers and businesses all over the world.
We have redrawn vectors for individuals, SMEs and large corporations.
We are proud to say that some of our work has been used to manufacture garments and uniforms worn by charities, celebrities and the (British) Royal Family. We have worked with customers from around the world - located in the UK, USA, Europe and Australia.

If you need a quick quote relating to an item listed on our website or something not listed (we do many things not listed on this site) then please use the form below:
Fill in this form and we will come back to you very quickly (within 30 mins if sent between 9am to 4.30pm UK time)

What our customers are saying about us

"Great service - very impressed with the quick turnaround and the quality of the image. Thanks!"

"Once again, an outstanding service and great quality in workmanship.
I always come here for my business related logos and vectors, and I am never disappointed.
Thank you again for your great skill and responsive service."

"Image to Vector conversion was redrawn and was fantastic.
Customer service excellent website easy to use. Generally a good experience. "

"I am based in England and have used this service a number of times to have low-quality, sometimes damaged logo images turned into high-quality vector files. The service is good value and there is ample opportunity to correct anything that isn't quite right in the proof. I'm very glad to have found the company."

"It's absolutely perfect.
Much appreciated.
Will use you again and let my colleague know.
Thank you"

"Image to Vector Conversion - Absolutely faultless service, good value, and an easy process. I had been putting off dealing with the upgrade of our Club crest for a while, I only wished I had done this earlier!"

"Thank you for the amazing quality and detail from the Photoshop logos I sent for conversion to vector, the quality is stunning.
Very good customer services and support with a super turn around time.
The Website is easy to use, and the quotation was practically instant, which helped with a limited timescale.
Using a safe web delivery service made receiving large files very easy.
Perfect services from start to finish!
"

"Great service, and really fast too. Changes were made as requested. Now my files are off to the laser cutters. Fab"

"Good quality service for jpeg to vector conversion and restoration of a historic logo, good response to requested revisions."

"Sanjay is brilliant as always, every order we place he is there to offer advice. Quick turnaround time and quality is second to none."

Some Case Studies
Vector Redraw Service - Vector Redraw Service for Large format printing such as shops signs
Artwork Redraw Service for Crests - How we have helped to redraw and customise crests and coat of arms for organisations
Image to Vector for Colouring Book Graphics - Otherwise known as a wireframe Vector (which can also be used for engraving)
Help and Advice
Why do companies request a Vector file?
Is an EPS a Vector File?
How to Save Money on Vectorisation
What is the difference between a Raster and a Vector?
Why Manual Vector Conversion?